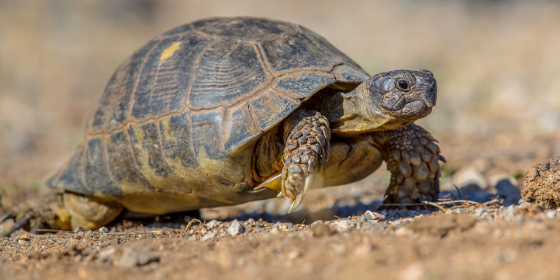 Southern Utah is a region that’s rich in unspoiled wilderness and home to a variety of climates and landscapes. This also means that it’s home to an array of wildlife, from the tiny and easily-overlooked to the oversized and simple to spot!

Here are just a few of the most common species you might come across during your visit to the area. 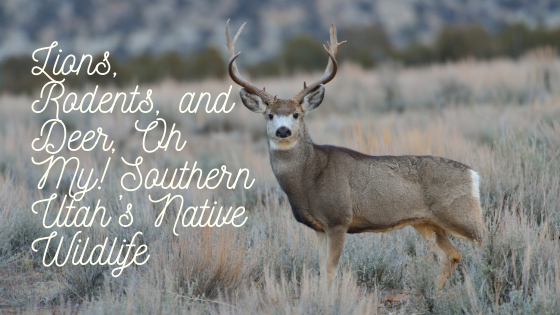 Perhaps the most commonly sighted mammal in all of Southern Utah, the Rock Squirrel can be easy to overlook due to its small size. But open your eyes and look around, and you’ll find these normally pint-sized creatures scrambling over rocks, crossing grassy lawns, and darting between trees.

While they are small compared to some of the region’s other mammals, the Rock Squirrel is actually one of the largest members of the Sciuridae family. They can grow up to a foot in length, and that’s without even counting that long, bushy tail.

Normally, Rock Squirrels are frightened of humans and will keep their distance. But in some areas, like in Zion and other national parks, they may become accustomed to humans. This can affect their natural fear and lead them to approach humans and even try to steal food. Beware; while they may look harmless, they can bite and may carry diseases that can be transferred to people.

Another common sight in the lower elevations of Southern Utah is the Mule Deer. Found throughout the state, Mule Deer is the smallest of the deer family to call Utah home.

You’ll mostly spot these deer grazing. Just like Rock Squirrels, as long as you keep a safe distance, they are not a threat. Unfortunately, they may dart across roadways or graze near the edge, which results in lots of run-ins with cars. Always obey speed limits and scan the road in front of you, especially at dawn and dusk.

Starting around mid-November each year, the Mule Deer breeding season, also known as “rut,” begins. During this time, Mule Deer may become aggressive if they feel they are threatened. Keep a safe distance when viewing these creatures, and never, ever try to touch or feed one, no matter how tame they may seem.

Easy to spot thanks to their oversized ears, the Black-tailed Jackrabbit can be found in the desert regions of Utah. These mammals breed year-round and can have up to four litters a year, so it should come as no surprise that they are a common sight in the state. Incredibly fast and agile, these creatures can cover a home range of between 49 and 74 acres.

Smaller than their large-eared cousins, the Desert Cottontail is even more common and can be found in a wider variety of landscapes instead of just the desert. Like the Jackrabbit, Cottontails reproduce all year round and can have multiple litters a year.

Okay, so this isn’t actually a common sight in Southern Utah. And that’s probably a good thing because unlike many of the mammals on this list, the Mountain Lion isn’t always harmless. But the creature is still a popular icon of the region.

Also known as a cougar, these large, predatory cats can be found at any elevation in the area, but they do prefer higher elevations. While there aren’t many animals that pose a threat to the Mountain Lion, the species has taken a big hit thanks to expanding human settlements. This, coupled with their elusive personalities, makes them a rare sight in Southern Utah.

Once severely threatened, this next species has been added to the endangered species list, which means that protections are in place and their numbers are once again increasing. While they aren’t as rare as the Mountain Lion, the Desert Tortoise can be just as hard to spot.

As the name suggests, these tortoises call the desert home and are primarily found in desert washes and shrublands. They spend 90 percent of their life underground in burrows and rocky shelters, which is why they are so tough to spot. When they come out, its to graze on desert plants, flowers, and fruits.

Perhaps the animal that tourists least want to see, the Great Basin Rattlesnake is the most common of the five rattlesnake varieties that call Southern Utah home. While they can reach 5 feet in length, most grow to just 2 or 3 feet. On a hot summer day, rattlesnakes burrow or hide under rocks, but they may become active at sundown or move about in the shade. They feast on small mammals like rodents, lizards, and birds.

Whether you’re hoping to catch a photo of an elusive Bighorn Sheep or just want to enjoy a picnic but are attracting a crowd of Rock Squirrels, run-ins with wildlife in Southern Utah can be exciting, fun, and sometimes stressful.

No matter the type of wildlife, always keep a safe distance. Never approach, harass, feed, or otherwise try to interact with any wildlife; this is for your safety and the safety and well-being of the wildlife. Remember, this is their home and national, state, and other parks are designed to allow them to continue to live wild and free while giving visitors a glimpse of their natural habitat. 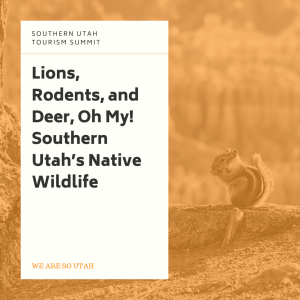