Flash Floods: Where They Occur, How to Spot Them, and What to Do if You Get Caught in One 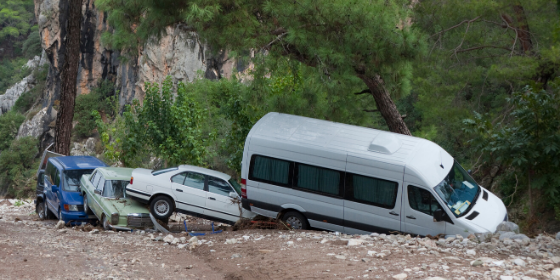 This week, Southern Utah had some of its first flash flood warnings of the year. This time, the flooding was relatively mild, and no one was injured.

Unfortunately, this hasn’t always been the case.

Flash flooding is a common, serious threat throughout Southern Utah. On a single day in September 2015, two separate instances led to the deaths of 20 people in Utah. Three mothers and their 10 children in Hildale, Utah were killed when flash flood waters washed their two vans downstream. Just 20 miles north of where those families perished, 7 people who were canyoneering through a slot canyon in Zion National Park were also killed when the waters rose without warning.

In 1998, a similar event killed two hikers from California who were making their way through the Narrows when rainfall made it swell. Just a year earlier, 11 people lost their lives in the same way when they got caught in nearby Antelope Canyon during a flash flood.

While flash floods are, by definition, sudden, there are ways to protect yourself. Keep reading to learn where flash floods occur, how to spot them, and what to do if you get caught in one. 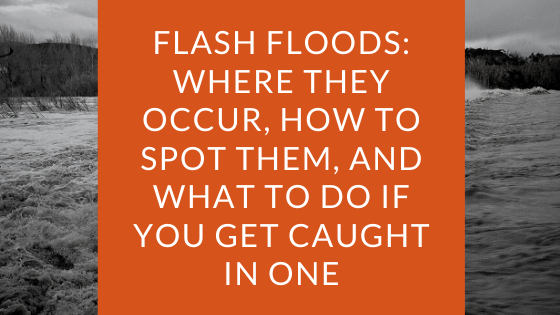 Where Do Flash Floods Occur?

The first thing you need to know to protect yourself from flash floods is to learn where they are most likely to occur.

It’s a common misconception that flash floods only affect existing rivers and streams. While it is true that these can swell without warning, flash floods can occur where there is usually no water at all.

Any low-lying areas, and especially those where water may funnel when it runs off of cliffs and hillsides, may also flood. Slot canyons and other narrow canyon areas are incredibly susceptible to flash floods, as well as incredibly dangerous.

Spotting the Signs of a Flash Flood

The best way to avoid getting caught in a flash flood is to pay attention to weather reports and heed warnings from experts.

When the rating is Possible, you should exercise caution. If it starts to rain while you’re on a trail, it’s a good idea to stick to higher ground. When the flash flood rating is Probable, avoid hiking trails that take you on low-lying trails or through slot canyons. When flash floods are Expected, you should avoid low-lying areas entirely.

Avoiding flash floods entirely is the best practice. But if you do find yourself on a trail when it begins to rain, there are a few signs that you can look for. A sudden surge in water in a river or stream is a likely indicator of a flash flood. A roaring sound may also accompany the rush of water. Debris in the stream or a change in water color are also signs of a flash flood.

What to do if You Get Caught in a Flash Flood

Sometimes even heeding warnings and watching for signs isn’t enough. If you unexpectedly find yourself caught in a flash flood, you need to act as quickly as possible.

Start by getting as high up as possible, even if it means leaving your gear behind. Remember that water levels can rise several feet in a matter of minutes. Never step in the water, no matter how shallow it looks. Water as shallow as just 6-inches can knock you off of your feet. Once you reach higher ground, stay there until the water recedes.

Protecting Yourself from Flash Floods

With spring almost here, flash flood warnings are likely to only become more common. If you aren’t familiar with the trails, it’s always best to ask a ranger where you’ll be safe from rising water on days when rain is in the forecast.

Unless you know what to look for, it’s best to ask the park service for their flash flood rating for that day. Simply checking the local weather forecast isn’t enough. Rain miles away from the park can still cause flash flooding as water runs down rivers and streams.

It isn’t just Zion that is at risk of flash floods, either. Much of Southern Utah is filled with canyons, rivers, and gorges. It’s important to always be aware of your surroundings, check weather forecasts, and avoid areas that may be prone to flooding when rain is forecast anywhere in the region.

Looking for more tips to stay safe on your visit to Southern Utah? Check out this guide to cold-weather first aid next. 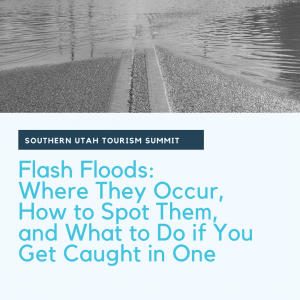